10 Easy Succulents for Your Drought-Tolerant Garden 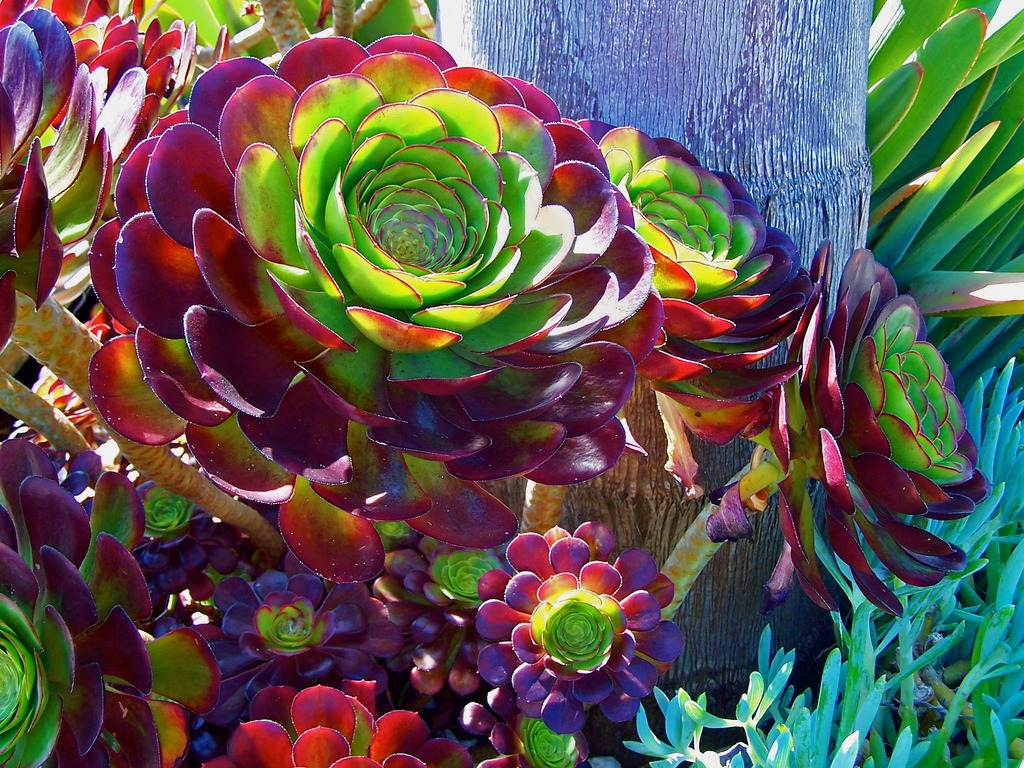 While most succulents thrive in coastal Southern California, some are almost effortless. The easy succulents on this list can handle poor soil, are easy to transplant and will add color as well as architectural interest into any outdoor living space.

A staple in many Southern California gardens, agave attenuata is as easy-care as they get. Large agave attenuata plants are expensive but if you have a neighbor that’s willing to let you hack off a rosette, all you need to do is stick it in the ground.

Plan for plenty of space because one rosette can clump into 6′ wide plants within just a few years. But, the good news is that you can keep cutting and transplanting them to other areas of the yard. We don’t have room for any more so recently left rosettes on the lawn with a sign for passers-by to pick up them up for free. They were gone within minutes.

Agave attenuata tolerates clay soil and life as a container plant, though you’ll need to supply containers with occasional water here to avoid drying out. Agave attenuatas do not like temperatures below 30°F (like most succulents on this list), prefer sun, but are a shade-tolerant succulent.

While any aeonium arboreum seems to do well in San Diego, the dark-colored varieties called aeonium schwarzkopf and aeonium atropurpureum are striking in areas where you need a color contrast. Pair them with blue senecio (mentioned below) or low-growing or bushy greens. Round rosettes with dark purple, spoon-shaped leaves branch out from cork-like stems.

These are also easy to transplant (though long stems are tough to keep straight until the roots are established). Aeonium arboreums (there is a green variety and a variegated variety, too) grows about 2-3 feet tall and wide and does need occasional watering to keep the rosettes big. They can handle full sun and partial shade and prefer deep, infrequent watering. Deer won’t touch them. It’s easy to find small sizes at local nurseries, even as small as 4″ pots.

The variegated aeonium sunburst is supposed to handle full coastal sun, but does best in our yard in filtered light.

This species of aloe often doesn’t need supplemental water by the coast and is considered fire-resistant plant, credited with saving homes from recent SoCal wildfires with its moisture-filled leaves. It’s a dense shrub that grows up to 9′ tall with spiked leaves in rosettes that can grow up to 18″ wide. Leaf color depends on the amount of sunlight received but the flame-colored flowers bloom on 2′ spikes during the fall and early winter.

As a member of the aloe genus, it is the type of plant that is considered to have healing qualities. Do your research before growing it for this use, however.

Otherwise known as a jade plant or friendship plant, crassula ovata has paddle-shaped, shiney and small leaves resting on thick branches. This succulent thrives on little water and doesn’t handle overwatering well. However, we have the variegated variety which seems to do well in perpetually-moist clay soil and full sunlight.

Crassula ovata is incredibly easy to propagate. In fact, it spreads by simply dropping leaves on to the ground. Some people have mastered the art of pruning jade plants into bonsai. They’re often seen growing around San Diego on their own, requiring little to no maintenance, but if you choose to grow them in pots, they can get top heavy and tip over without pruning.

We grow this plant in partial SoCal coastal shade with a lot of success in its kiwi (variegated) form which has yellow and green tinted leaves with pink outlines. The plant grows about 2′ tall and 3′ wide, tolerating a wide range of watering. Away from the coast where the climate is warmer and drier, this is an option for full shade. It also tends to do well on rocky slopes.

Fire sticks or euphorbia tirucalli is often mistaken for a cactus because of its pointy branches. It’s very easy to grow but not recommended in high traffic areas with pets and kids because the milky residue can be an irritant. It can grow up to 8′ tall over a long period of time and 3′ wide. It prefers full sun and is a slow-grower.

These little echeverias are found in small sizes at Green Gardens, Home Depot and other nurseries around San Diego. They don’t handle overwatering and need well-drained soil. The rosettes grow up to about 12″ wide with little red tips. They will form pups and spread along the ground in clumps versus upright with stems. They’re sometimes called lipstick echeverias.

This pale blue succulent rosette grows quite quickly outdoors on the ground, without stems. It’s also suitable for containers, where new pups will eventually hang over the rims, and indoors. These succulents love filling in cracks in concrete walls and do well in rock gardens.

They can handle full sun or partial shade.

Often mistaken for ice plant, Senecio mandraliscae (referred to as blue senecio) is a succulent that pretty much looks like a basket of blue french fries. It is often used as a ground cover. It’s easy and inexpensive to buy in flats in places like Home Depot and requires very little care once planted. It can handle full sun or partial shade and frequent irrigation (though it’s drought-tolerant).  Ours survives on overspray from the neighbor’s irrigation and not much else.

If you’re lucky enough to score cuttings from a neighbor’s plant, roots form in as little as six weeks. Small, white flowers appear in the spring that bees love.

Portulacaria is similar to a jade plant but has much smaller leaves on reddish stems. It can grow quite tall, to about 8′ while a dwarf version is suitable as a ground cover up to just a few inches tall.  It’s a recommended plant for xeriscaping because it tolerates irregular watering.

It’s often called elephant food because it’s native to Africa and edible–the leaves have a bitter taste (eat at your own risk). It is one of the most efficient plants for absorbing CO2.

What succulents do you find easy in your garden?

Paver Sealer Guide: Should I Seal My Paver Installation?

How to Hide an Ugly Fence Guide

What is the Best Carpet Cleaner for Pets?