How to Grow Cymbidium Orchids Outside in San Diego 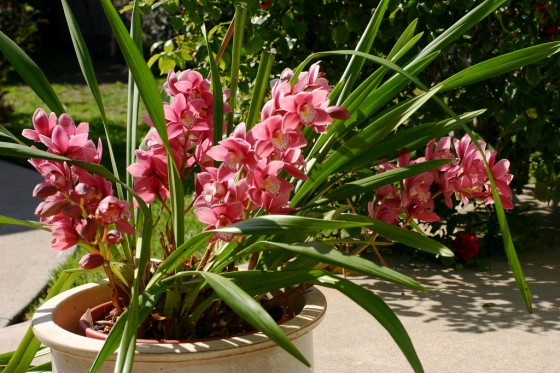 While some orchids do better in indoor filtered light, others thrive in Southern California sunshine. Cymbidium orchids are a top pick for gardeners who are just beginning to tackle outdoor orchids because they are particularly well-suited to our climate and don’t require as much care, relatively speaking.

Once a hobby of the elite, orchids are now available for purchase everywhere from local nurseries to Trader Joe’s. And, their prices won’t break the bank, thanks to nursery tissue labs cloning heartier plants in higher quantities.

Even so, cymbidium orchids are rarely seen in San Diego gardens. Be the envy of your neighborhood by adding them to yours.

Cymbidium orchids aren’t native to the United States. In the wild, they’re found in Asia and certain parts of Australia. Dating back hundreds of years ago, orchid hunters risked life and limb to seek out rare and unusual orchids such as for collectors. Many of these prized orchids wound up in the UK where they remain registered today.

It’s thought that cymbidiums arrived in California in the early 1900s but they didn’t become popular until much later. Wealthy homeowners hired horticulturalists who were able to source rare orchids (often from the UK) as centerpieces of lavish gardens.

Decades later during World War II, European and English nurseries sent orchids to the United States in order to preserve stock. The assumption is that these were also studied and cloned. Between the 1950s and 1970s, orchid growing boomed in Central California where a number of growers still exist today on what is known as the California Orchid Trail.

Eventually, the orchid craze faded but it’s currently experiencing a resurgence due to a variety of new color options as well as the development of miniature cymbidiums and pendulous cymbidiums (these pretty drooping blooms are pictured below).

From the approximately 50 species of cymbidium orchids, thousands of hybrids have been developed.

Why Grow Cymbidiums on the Patio?

Leaving colorful, exotic-looking cymbidiums in pots is a fantastic way to accessorize an outdoor living space, brighten up patio pavers and add color to spaces that aren’t plantable. Though the truth is that they don’t tolerate life in the ground as their required rapid drainage isn’t easy to come by in local clay soil unless you are constantly amending it.

Most gardener choose to leave the orchids in black plastic nursery pots that don’t evaporate water as quickly as terracotta and other alternatives do. Should a random hail storm or bout of scorching heat blow through the region, pots enables the plants to be moved out of harms way. Gardeners in inland San Diego will likely need to shift pots around to avoid heat.

Thanks to clever plant breeders, cymbidium flowers range from white, green, yellow, orange, burgundy, pink and purple with even some multi-color varieties.  As many as 35 blooms can be seen on a single spike which last for up to about 8 weeks on the plant. Flowers range from about 2-5″ in diameter.

Plants bloom any time from September through June, depending on the type, though most bloom in February.  Some newer cymbidium hybrids even bloom twice in a year. When they are not in bloom, the plants gorgeous arching leaves still provide plenty of visual interest.

Interestingly enough, they do not grow well indoors because they need to experience temperature fluctuation in order to bloom. This is part of the reason why they don’t do well in climates such as Florida. If you insist on growing them inside, put them outside at night.

These orchids prefer bright light (as opposed to direct sunlight, unless it’s winter when they can tolerate direct sunlight along the coast) but cool locations and moist soil that’s not soaking wet. Depending on the weather, San Diego gardeners report watering about once a week on average though this will depend on the orchid’s size, location and pot.

These orchids love cool breezes. If temperatures drop down to 26°F, the orchids are hearty enough to handle that for an hour or two. In coastal San Diego, they can pretty much be left outside year round.

A healthy cymbidium leaf is bright green. If the leaves turn yellow, they are getting too much sun.  Dark green leaves signal too much shade. If the leaf tips turn black or brown, flush the plant with purified water in order to wash away salt from our air and minerals from our water.

Every few years, after the roots start to creep up above the pot, cymbidiums need to be divided and repotted after their flowering period. It’s fairly easy to do when you know what to look for and this video does an excellent job of explaining the process.

Pests to Watch For

Snails are the main enemy of cymbidium orchids in Southern California so be sure to have your Sluggo or other natural pest control methods at the ready. Aphids, mealy bugs and white flies are also risks. When clipping or dividing orchids, make sure to sterilize tools in a mixture of diluted bleach in water to avoid cross-contamination of pests and disease.

Join the San Diego Orchid Society during monthly meetings on the first Tuesday of each month (with the exception of May and December) at Casa del Prado in Balboa Park. It’s free for the public to attend to attend a meeting but also easy to join the society.

Admire a wide variety of orchids in one place is by attending the A Symphony of Orchids 2014 show and sale at the Scottish Rite Center on March 21-23. The San Diego Orchid Society puts on four events a year and this one is by far the largest and considered the best with educational sessions to sit in, as well.

The Carlsbad Flower Fields open on March 1, 2014 and include touring their cymbidium orchid greenhouse in the cost of admission. These stunning orchids are for sale at the nearby Armstrong Garden nursery.

The San Diego Zoo’s Orchid Odyssey is open to the public on the third Friday of every month as well as select Sundays. Here, cold and hot rooms display a huge variety of orchids from all over the world as well as incredibly rare species. The zoo is home to over 3000 orchids, many of which are publicly displayed around the park when Orchid Odyssey is closed.

Have you tried to grow cymbidium orchids outside?

How to Use Urine Zero on Artificial Turf