10 Great Plants for Drought that Are not Succulents 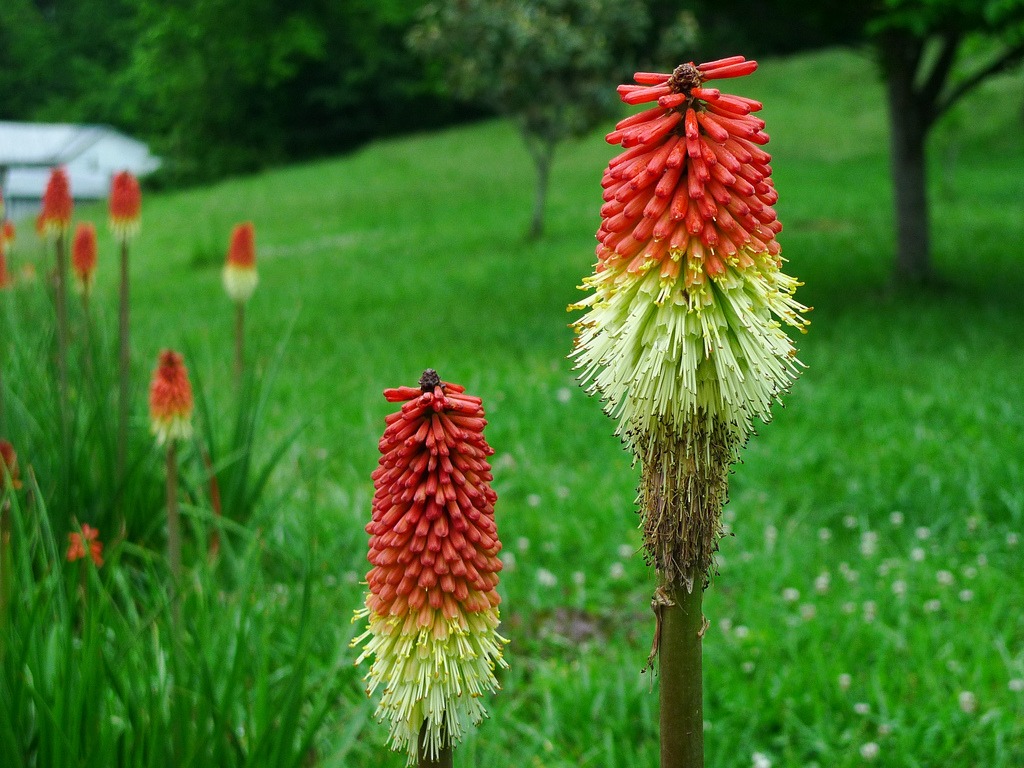 At the moment, two things are for certain. The state of California is in a drought and even coastal San Diego is experiencing unusually hot days at times throughout the year. The call for water-wise plants that can handle spikes of heat without extra water has never been louder. And while many homeowners default to succulents, which are often smart choices, there are other plants for drought that can tolerate heat waves without much extra care and look fantastic in the garden throughout the year.

Also known as a Torch Lily plant (pictured above), Red Hot Poker plants are native to Australia and grow up to 5′ tall. These plants have foliage that clumps in a grass-like manner. Single flowers emerge seasonally on tall spikes that are red, orange and yellow in color. More flowers will emerge with diligent deadheading and they can be purchased as young plants or grown from seed. There is also a smaller, pure yellow version that is often appropriately referred to as a yellow poker plant and also drought-tolerant. It’s wise to cut down these plants occasionally to keep the foliage looking fresh, otherwise it can start to look shabby.

This drought-tolerant herb gives your yard a Mediterranean look while adding fragrance. Rosemary is evergreen and tends to grow well in San Diego with neglect (speaking from personal experience).  While there are a number of different varieties, on average they all grow to about 3-6″ tall and sprout flowers that are white, blue or light purple. Rosemary is commonly used in San Diego as erosion control on slopes, depending on city requirements, and can be grown dense enough to serve as a privacy hedge.

Over 80 varieties of leucadendron exist but one in particular that does well—especially if you have the space for a tall, slightly bushy evergreen shrub—is the Safari Sunset version. Cut the reddish-green foliage to place in vases (local florists often use it, too) to decorate the house. It grows to over 8′ tall but can be pruned. I have one that survives on solely occasional overspray from the neighbor’s sprinkler system if it’s a breezy day.

While it’s available in some San Diego nurseries and a relative to leucadendron (also on this list) protea isn’t as common in Southern California as perhaps it should be. First, the large flowers and foliage are stunning with a number of varieties to choose from. In addition to the variety in the above photo, pin cushion proteas—because they do look like round cushions with little pins sticking out—add architectural interest to the yard. These plants are native to South Africa and can be special ordered, if not available off-the-shelf. They’re becoming more prevalent at local florists so cut the expense by growing your own.

Many homes in San Diego have New Zealand Flax already. It’s popular for an upright geometric shape and spear-like colored foliage that can include brown or multicolored versions with cream, pink and green stripes. While dwarf varieties maintain heights of under 4-5′, non-dwarf varieties can reach up to 10′ tall. New Zealand Flax does not tolerate moist conditions so be careful not to overwater or place in a wet area.

Blue Fescue is becoming an increasingly popular choice in San Diego as a mass scale ground cover with some replacing entire lawns with it. The icy blue color softens landscapes and contrasts well with greens like artificial turf, palm trees and especially the brown New Zealand Flax mentioned above. It blooms tan colored flowers in late summer and grows in clumps up to 12″ wide. Local nurseries sell it inexpensively in flats.

One of the most popular ornamental grasses is purple fountain grass with it’s burgundy leaves and soft feathery blooms that appear in late summer and fall. It reaches up to 4′ tall and 3′ wide and does particularly well in containers. Deer won’t touch it and some use it as an erosion control plant. Purple fountain grass is not to be confused with fountain grass, considered invasive in Southern California. Its appearance is similar though fountain grass is larger with green blades of grass and much taller blooms.

Lavender does a great job of holding its own in high heat while still looking gorgeous. While there are a number of different types of lavender to choose from, most typically can handle clay soil and mild neglect while sprouting delicate blue, lavender or white flowers in the summer. Not to mention, it’s a practical herb to use inside the home from potpourri to cooking while providing fragrance outside. The scent of lavender is one of the oldest perfumes on record and still popular for its calming effect humans and animals. English lavender is the most common type, and grows well in San Diego.

This evergreen shrub is actually native to San Diego and can reach heights of up to 5′ tall and wide. This beauty needs good drainage and, because it’s a sage, is known for strong fragrance in its gray-green leaves. If you’d like to attract hummingbirds and butterflies, they love these pretty purple flowers.

Coneflowers (echinacea) are perennials that look like daisies, except that they are slightly larger with a center is raised like a dome. These beauties can be grown from seed—an excellent project for getting kids interested in gardening—while also attracting birds and butterflies into the garden. Echinacea purpurea is the most popular due to its more fibrous root system being more forgiving in garden situations. Though flowers are typically purple or lavender, shades of coneflowers now also include yellow, orange and reds.

Remember that any plant will need regular water prior to becoming established. In addition, be sure to amend the soil so that your new additions get off to a healthy start and group plants with like water needs together. See also our tips for gardening in drought conditions.

Which of your plants tolerate drought and heat waves well?

Dog Run Ideas: How To Build A Backyard Dog Run

How Does Artificial Grass Stay in Place?