13 Succulents that Are Native to San Diego 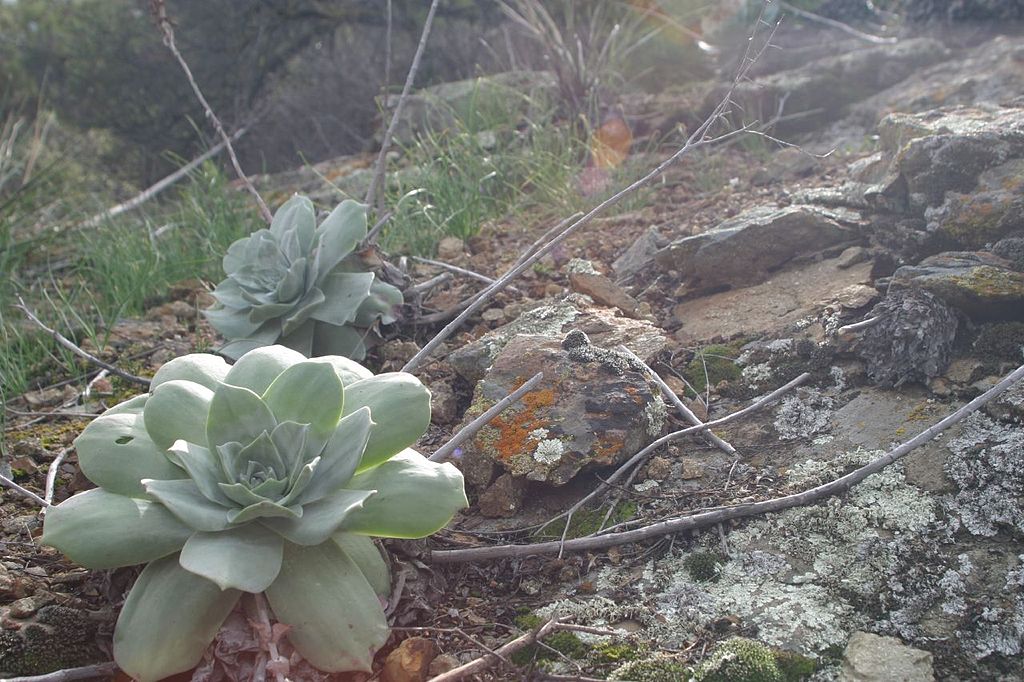 The world of plants native to California is rather large. To give you an idea, different native plants might be adapted to cover our high end the thermometer at 130° F  while others can tolerate  -54° F. We have snow in the Sierras and dry heat of Death Valley as well as a multitude of microclimates in between.

Therefore, a plant described as a California native may not always be the best solution for a San Diego garden. Experts suggest drilling down a bit further. It’s best to select California natives that thrive in your part of the state because they will be best adapted to local growing conditions and preferred by local wildlife.

Succulents are very popular additions to water-wise gardens and hail from all around the globe but the thirteen listed here are native to San Diego. Some can be found in local nurseries while others should be admired in the wild.

Blochman’s Dudleya typically grows along the coast. Triangular leaves protrude off of an upright stalk that may bloom a few star-shaped flowers with white petals, sometimes with streaks of red. The color of the plant can be brown, reddish-purple, or green.

Care must be taken if you ever spot these pretty plants in the wild as they are quite rare.

Cane Cholla grows with roughly foot-long tubular segments stemming off of a single trunk. Segments can break off and form new plants. The cacti looks like a cane or walking stick when the dries out and dies. Purple flowers appear in the spring and then transform into yellow fruits that are dense with calcium and an important source of nutrition for wild birds and mammals. In fact, birds often nest in these plants likely as the spines provide protection from predators.

Those in search of local succulents to plant at home should consider Dudleyas. The Chalk Dudleya (also pictured at the top of this post) produces 12 – 18″ clumping rosettes with chalky white leaves that grow extremely well in rock gardens, container gardens and even tiny cracks in walls for a little impromptu vertical garden. One to two foot spikes with red flowers on top emerge in the spring. The leaves lack sharp edges and they’ll happily survive without much care. A variety of Dudleyas are sold in local nurseries.

Keep an eye out for Chaparral Yucca, also known as “Our Lord’s Candle”, the next time you’re out hiking around SoCal. It’s a small, stemless shrub with a cluster of green leaf spikes about 1-3′ long and a flower stalk that reaches up to 10′ tall with multiple bell-shaped flowers at the end ranging from white to purple. You can see them along the I-15 between San Diego and Las Vegas. Have clay soil? This plant thrives in it.

Cliff Spurge prefers a coastal climate and is seen between San Diego and Orange County as well as on the Channel Islands. It shoots a 10-15′ spike within just a few weeks. Look for it growing on rocky slopes and in sand. The little hairy flowers are stunning with red scalloped leaves that have a yellow fringe. Blooming spans from December through August. It’s a little hard to find but can be purchased for home gardens.

If you don’t mind the spikes, here is another succulent native to San Diego that is suitable for home gardens.

It’s a suckering agave which means it spreads like a ground cover of 2-3′ tall rosettes that look great in mass plantings, containers and rock gardens.

Coastal Cholla is a tree-like cactus that can reach up to 10′ in height that grows green fruit in chains of up to five. It has very sharp spines and is found in the wild from Santa Barbara south to Mexico.

This cactus grows up to about 3′ tall and can be seen all over San Diego in rather large colonies. The paddles have tiny, barbed spines called glochids and sprout pretty red fruits. The fruits of most prickly pears—you might see people harvesting them in public spaces—are edible and sold in stores under the name “tuna” or “nopalito”. Coastal Prickly Pear can be grown in home gardens that have enough space to prevent the spines from becoming an issue.

San Diego Fingertips is a native succulent that grows about one foot wide and tall with round leaves about as thick as a pencil. It’s not commonly found in the wild lately but can be grown at home. Birds love its white flowers that bloom in summer and it tolerates clay soil quite well.

A single Fish Hook Cactus can conveniently bear both male and female flowers from mid-spring to mid-summer. Bright red fruits produced after flowering are edible and taste like a cross between a strawberry and a kiwi.

It might be considered a weed in some places—a wildflower in most—but Red Maids sure have beautiful deep pink flowers that open mostly in the afternoon. The leaves are edible and cattle love them, but the black oil-rich seeds are what made the plant a substantial part of Southern California Indian diets. The wildlife-friendly plant grows up to about 8″ tall and makes a good ornamental in the garden that is easily plantable by seed.

The spherical San Diego Barrelcactus is threatened by development, agriculture, and other alterations of its habitat in San Diego County. You can see it at Point Loma Ecological Reserve but also buy it to plant at home. It grows up to about 1′ tall with arches spines and blooms yellow to greenish flowers with red or pink scales. The fruit is yellow or red.

Spike moss grows in rocky places in many different habitat types, from the coastline to the mountains to the deserts and can be purchased to use in a residential outdoor living area.

Do you have succulents native to San Diego in your garden?

How To Grow A Cutting Garden {Guide}

10 Super Foods to Grow Yourself