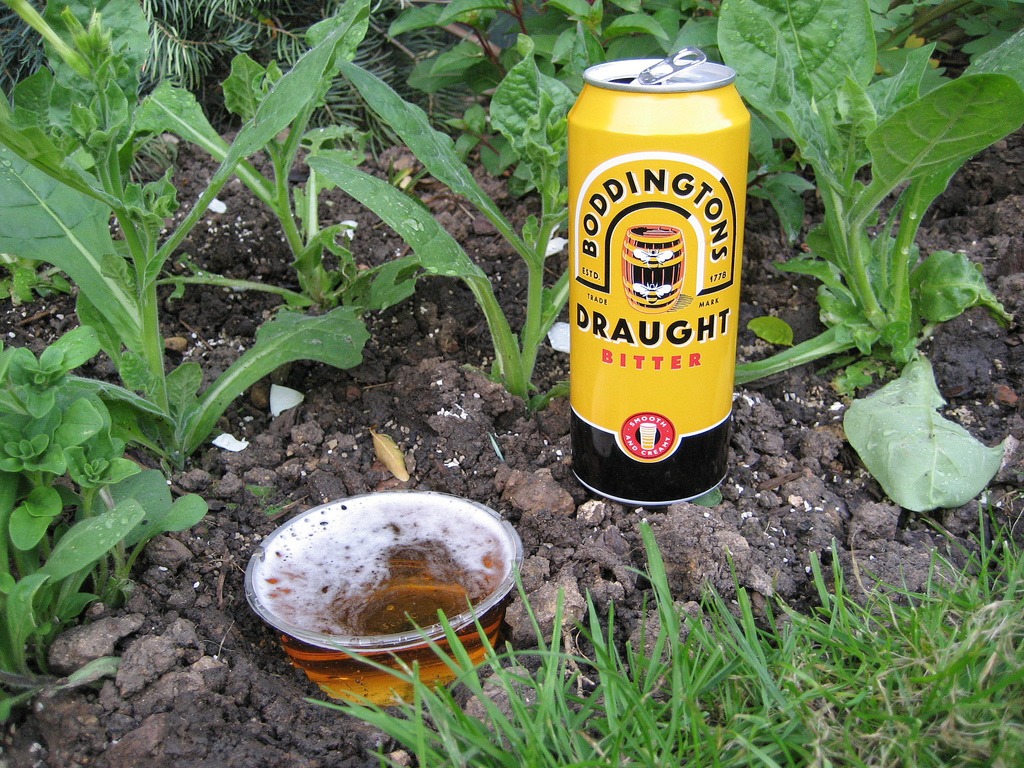 Clever gardeners around the world have figured out how to sort out common gardening issues by repurposing household items and centuries-old techniques. Most of these gardening hacks are also easy to implement and cost less than a conventional alternative.

Grab an empty, shallow and disposable tin as well as that abandoned beer. Pour a little beer into the tin and place it around dahlias, vegetables or any plants with a snail or slug issues. These slimy pests are attracted to the smell of the beer, crawl in and drown themselves. Bury the tin in the dirt to hide the edges, if you’re worried about aesthetics. Jars work, too.

Others pour half of a beer into a watering can with 1 tablespoon of Epson salts and 2 tablespoons of fish emulsion. Mix well, water on top of plants and watch them flourish within  a few weeks.

Plants and pests don’t discriminate so cheap beer works just as well as craft beer does.

Collect those pests and liquify them in a blender using one part water to two parts bugs. Strain, put the liquid in a spray bottle and use as a very effective, natural insecticide. And, of course, it helps to have a designated blender for this rather than what you use in the kitchen.

While there has been some debate over whether or not leftover coffee or coffee grinds are beneficial in the garden, the folks at Sunset Magazine put both to the test. It turns out that coffee adds phosphorus, potassium, magnesium, copper and nitrogen to the soil. For those of you who would like to geek out by reading the entire report, visit Sunset Magazine.

Coffee is also a deterrent for slugs and snails and a natural anti-fungal.

Groups of three and five, for example, look more balanced while giving the illusion that plants are larger and perhaps healthier than they really are. There is something about repetition that creates a feeling of reliability and comfort in our brains.  Plus, garden experts believe that odd-numbered groupings of plants in asymmetrical patterns, such as a group of three in a triangle, replicate the natural look of plants growing in the wild.

This one may be an urban legend, but it’s thought that planting in the evening yields healthier plants and that tilling the soil under the cover of darkness prevents weeds from sprouting because they need sunlight to do so.

Mix a generous amount of packing peanuts into the soil of a container garden. This technique uses less garden soil,  making large containers lighter than they otherwise would be. The latter is especially handy if you anticipate moving them around.

Speaking of reducing soil in container gardens, save small plastic nursery pots—especially the little six packs—and flip them upside down in the bottom of large containers. The space they occupy translates to less soil required in the pot and a lighter container garden.

Bananas are full of potassium, potash, calcium, magnesium, sulfur, phosphates and sodium—nutrients that plants need. They decompose quickly for effective nutrient delivery and are thought to help plants fight off disease. Some gardeners toss banana peels into a blender with water to lessen the decomposition wait time. Roses and tomatoes especially love a banana peel feeding.

9. Line the Bottom of Pots

Cover container pot drainage holes with diapers or sponges to help pots retain water. Keep in mind that some diapers have chemicals to make them absorbent so you’d want to avoid using these with edible plants. Coffee filters work for this purpose, too, while allowing water to slowly drain out.

If you’re the type of person who likes perfectly-spaced plants. Mark ruler lines on your long gardening tools with a Sharpie or paint for easy measuring.

11. Give Seedlings a Drink of Tea

As your seedlings start to emerge, spritz them with a spot of chamomile tea every day. Its anti-fungal properties will help prevent what is called dampening off, which is when the seedlings become weak and yellow after  being transplanted into the garden.

While this solution might cost a few dollars, literally, some gardeners glue copper pennies to the top edges of raised planter beds. The pennies must touch or overlap. Copper repels snails and slugs and some gardeners promise that this technique keeps them out.

Cut the top off of a two-liter soda bottle, remove the cap to allow air flow inside and cover seedlings to create a mini greenhouse. Or, you can make a more complex greenhouse using two soda bottles.
Or, don’t cut the bottle in half. Poke holes in the side of the bottle and bury it next to a deep-rooted plant like tomatoes. Fill the bottle with water, which will slowly leach into the soil through the holes. This is a great tactic for travelers and busy gardeners.

Put a whole egg into a container garden before adding dirt and plants. The egg will decompose as a slow-release fertilizer.

Don’t toss that water you used for boiling perfect eggs. Let it cool and toss it into your vegetable garden where plants will thank you for the added calcium.

Goldfish chow on mosquito larvae so add some to your rain barrels. Use netting on top to prevent the birds from scooping them up, if your rain barrel doesn’t already have a cover. San Diego temperatures allow goldfish to remain outdoors year-round, but if you don’t live in a temperate climate, you’ll need to bring them indoors during winters. This  hack will also require a barrel with a spigot high enough on the barrel so the goldfish aren’t released when you drain it.

Pour builder’s sand into a bucket and store your tools in it with the blades facing down. The sand will help prevent the tools from rusting, which is all too common of a problem in coastal homes.

This isn’t rocket science but it might be a tip you’ve never considered. If you like to rotate plants in and out of your garden, make the job easier by leaving their containers on when planting them in the ground. This way, you can slip them in and out with ease especially if you choose the same sized plant each time. It goes like this… plant an empty one-gallon pot in the ground. Buy a one-gallon plant, leave its container on and slip it into the planted container. Easy in, easy out.

Tired of dirt inside and around your nails? Slide them over a bar of soap before gardening to cover pesky crevices that would normally get dirt lodged inside. After gardening, just wash your hands. The soap will wash off with no dirt in sight.

Poke holes in a water or soda bottles. Attach it to the end of your hose with waterproof tape. Turn on the hose and you’ll have a nice DIY sprinkler to water your plants.

From Our 5,171 Happy Customers

Herbs Every Gardener Should Grow

How to Get OLD Dog Urine Smell out of Carpet or Artificial Turf?