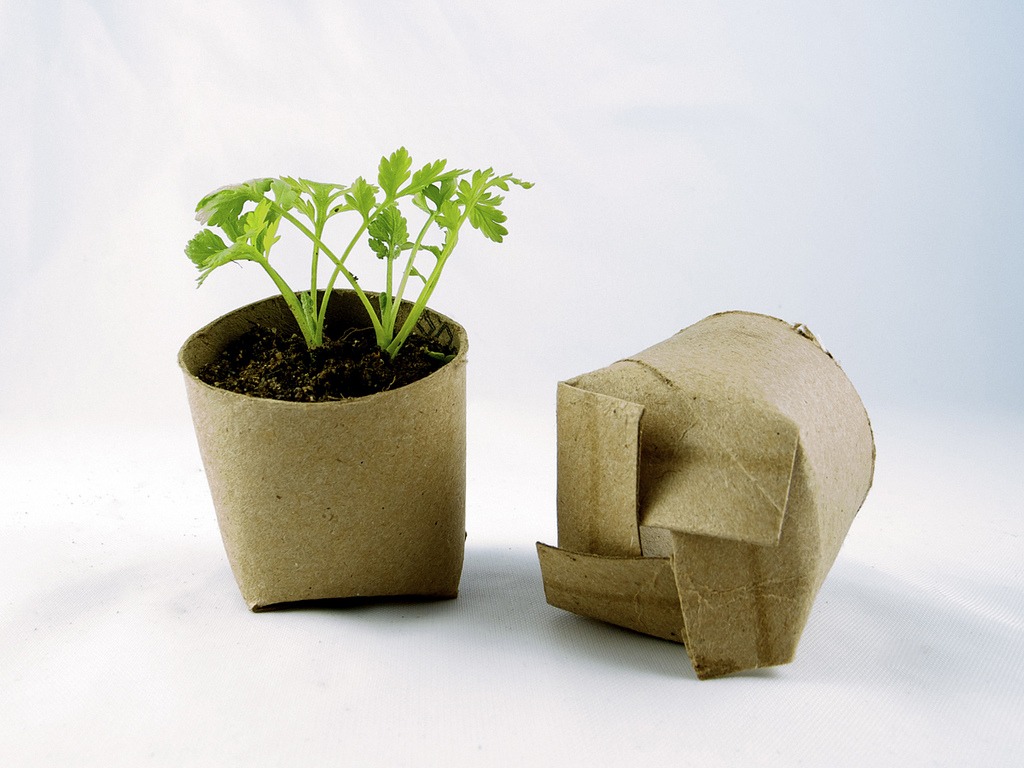 With spring on the horizon, it’s time to start thinking about planting seeds. Not only is it a cost effective way to get your garden going–a packet of seeds usually starts at a dollar or two–it’s also a fun tool for getting your kids interested in gardening.

Sprouting seeds also makes it possible to grow exotic or unusual plants that aren’t readily available for purchase at local nurseries. The internet is full of mail order seed catalogs that you and the kids can browse.

Other benefits of sprouting seeds in advance includes determining whether or not you have viable seeds to begin with and allows the process to occur at a much faster pace than it would if the seeds were planted directly in to the ground. It usually takes an average of 2 days or so to see results.

Once you have seeds in hand, there is absolutely no need to spend a dime on seed starting kits and pots. We’re willing to bet you have one or more of these ten things lying around the house.

10 Seedling Containers You May Already Have at Home

Breathe new life into containers that you may otherwise throw away by converting them into seed pots.  Anything that you think will safely hold dirt and water should suffice, but we have a few items on this list that may surprise you.

A half-sheet of newspaper can easily be folded into a little box or cone while providing sufficient drainage. Fold it up how you like or use these handy instructions for how to fold a perfect origami newspaper seedling pot. Be careful not to flood the newspaper with water if your seedlings require more moisture.

Paper towels offer a controlled environment without soil which also eliminates risk of the seed being destroyed by pathogens. Moisten a paper towel and place the seeds on top of it. Fold it in half, making sure that the seeds are near the crease with about an inch or so of room to sprout. Then, fold the paper towel again so the seeds are wrapped up.

Slip the folded paper towel into a labeled, zippered plastic bag. Blow air into it, seal, place it under a window in order for it to receive some sunlight (check the seed packet for instructions) and wait a few days for them to sprout.

Note that a sprouted seed is extremely fragile so be sure to remove it with tweezers (lifting by the seed, not the sprout) or just sort of toss the seed into the planting area from the paper towel without touching it.

How can this method involve repurposing? Well, during times you use only a small portion of a paper towel, cut off the clean part and save it in a Ziploc bag for future seed sprouting.

The above technique also works with unused paper coffee filters. This isn’t technically a recycled pot, but just an FYI!

Take an empty toilet paper roll and make some cuts in the bottom, about an inch or two. Fold the cut pieces inward to make a cup, fill with moist dirt and plant your seeds. It helps to store these toilet paper roll cups upright in a container so that they don’t tip over while the seeds are sprouting.

Cut a paper towel roll into thirds and then proceed in the same manner as the toilet paper roll.

Use the can’s contents and then make it a seedling pot. A small hole for drainage at the bottom may be necessary. If you really want to get clever, use cans that correspond to they type of seeds you’re sprouting (use an empty can of green beans for sprouting green beans, etc.) or put your kids to work by having them color cute paper labels to wrap around the cans.

Cut the top off of a milk carton for a perfect seedling pot. If you need more space, use the top of the carton that you would otherwise discard to make dividers, as the clever person above did. You could also cut up the remaining milk carton scraps to use as mulch around a small plant to help its pot to retain moisture.

Don’t throw away that plastic take out container (styrofoam won’t work)! Wash it and reuse it to plant seedlings. These work well because the lid can provide necessary humidity when closed.

Also, provided that the lid is completely detachable, these take-out containers can also hold your other DIY toilet paper roll planters upright.

Starting seeds in empty yogurt containers may require punching a drainage hole in the bottom, but it’s a great way to repurpose them.

Eggshells make awesome seedling pots because you can transplant them directly into the ground after cracking the bottom to allow roots to spread. In about four weeks, the eggshell will completely biodegrade.

The process involves tapping the top of the egg off with a sharp knife, pouring the egg out (if cooking it), washing the eggshell with water, using a thumb tack to piece drainage holes in the bottom and then planting the seed in soil. This very short video illustrates the entire process.

Some also choose to omit the hassle of using the eggshell and plant directly into cardboard egg cartons instead, as cardboard is also biodegradable.

How to Start Seeds

Plant two or three seeds per pot in already moist (not watery) soil. The reason is if you add dry soil and then moisten it, the seeds may float to the top or sides of the container, which isn’t where you want them to be.

Planting instructions are usually on the seed packet. Typically, you’ll want to plant them about three times as deep as their diameter. If the seeds require light to sprout, just push them into the wet mix with your finger as they’ll need to remain toward the surface of the pot.

In Southern California, it’s not absolutely necessary to wrap the pots in order to create a warm, humid environment unless your indoor temperature drops below 65-70 degrees.

The average potting mix is likely too rich for starting seeds. Make sure to use something with finer particles or buy seed starting mix at the nursery.

Transplanting Seeds Into the Garden

If using a non-biodegradable pot like a milk carton, slip the sprouted seed out of the container (just as if you would with a nursery pot). However, if using an eggshell or a cardboard container, then just plant the entire thing in the dirt and wait for it to biodegrade on its own.

Do you start seeds in repurposed seed starting pots or just toss them in the ground?

From Our 3,510 Happy Customers

How to Design Landscape Lighting

How to Control Erosion and Runoff